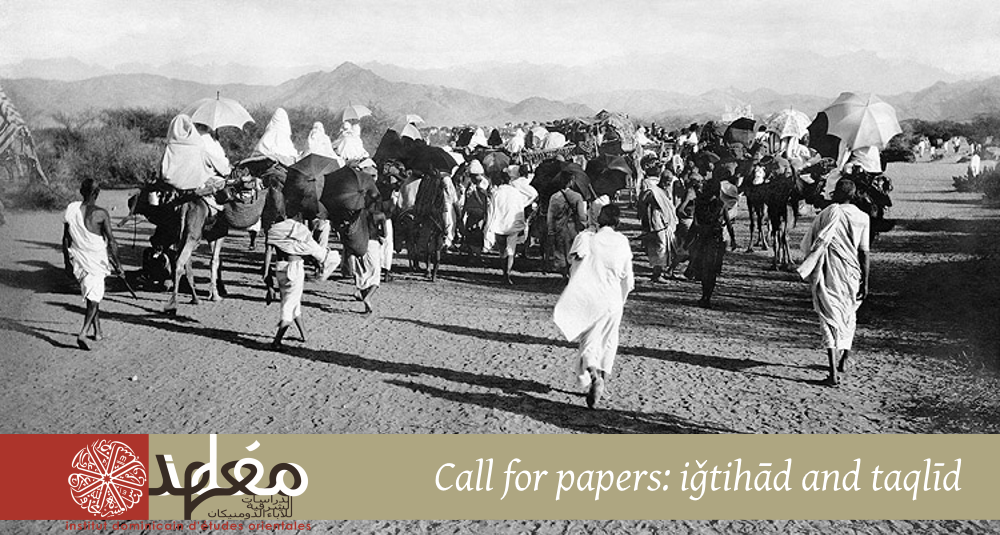 In the context of the Islamic reformism that emerged as early as the 18th century, some Muslim voices were raised against the practice of taqlīd (‘legal conformity’), and which has been accused of being responsible for the decline of the Islamic world. Following the thought of Ibn Taymiyya (d. 728/1328) and the example of Muḥammad b. ʿAbd al-Wahhāb (d. 1792), the Yemeni Salafists al-Ṣanʿānī (d. 1768) and al-Šawkānī (d. 1834), the Mughal revivalist Šāh Walī Allāh (d. 1762?), and even the Egyptian thinkers Muḥammad ʿAbduh (d. 1905) and Rašīd Riḍā (d. 1935), all called for the renewal of the practice of ‘reasoned reflection’ (iǧtihād) in Islam, and for overcoming the practice of taqlīd in legal schools, which were considered as ossifying.

There was a sharp criticism of taqlīd and a strong emphasis on iǧtihād, both of which were seen, in the paradigm of reformism, as mutually exclusive.1

This debate and way of conceiving taqlīd and iǧtihād were largely taken up by Western scholars. Yet, Norman Calder and Sherman Jackson showed that this perspective is reductive, as it does not sufficiently reflect the emergence and development of each concept, nor does it address their articulation, both in the field of uṣūl al-fiqh and uṣūl al-dīn. Moreover, it ignores their political contexts.2 Thus, the negative connotation given to taqlīd in Islamic studies can partly be seen as a projection by the Moderns (Ahmed Fekry).3

Nevertheless, although the doors of iǧtihād were never ‘closed’ (Hallaq),4 the majority of scholars from the 5th/11th centuries onwards, like al-Ǧuwaynī (d. 478/1085), supported the idea that Islam, as a religious system, is complete.5 Consequently, a concept of history, which is marked by the climax of legal and theological development (both qualitatively and quantitatively), has come to the fore so that any evolution is then seen as an alteration or even a failure of Islam. However, iǧtihād was never abolished and remained an integral part of religious reflection. Rather, it was the predominance of taqlīd that the reformers challenged.

We can then ask ourselves how and through the intellectual activity of which social actors does each paradigm base its legitimacy and predominance?

At the theological level, and in a context characterized by the influence of Sufism, the supporters of taqlīd have shown that scholars can actually be illuminated by the Prophetic light, so that their teachings on the knowledge and will of God can be certain. From this point of view, the hagiographic discourse on the four founders of the schools of fiqh can be considered as a marker of this proximity to the Prophetic light. As for the supporters of iǧtihād, they stressed that the duty of each believer is to search the sources, and not accept any input without having first extracted the evidence themselves (Ibn Qayyim, d. 751/1350).6 However, this approach, defended in particular by the ahl al-ḥadīṯ, begs a fundamental question regarding the authority of the Prophet’s teachings and that of the Companions: isn’t following the Companions a form of taqlīd? Couldn’t what is alleged against the four legal schools founders be applied to the Prophet’s imitators?

Beyond these theological debates, the use of taqlīd or iǧtihād has also been part of political disputes. In the history of fiqh and maḏāhib, iǧtihād was used as a political instrument to reject the teaching of particular schools, while taqlīd made it possible to justify conservative positions. It could also have been a vector of stability and governability.7 On the other hand, if taqlīd of different schools seems to disfavor the unity of umma as a human expression of divine oneness, the plurality of opinions which comes with taqlīd has also guaranteed a form of pluralism in Islam that resists against the temptation towards uniformity or homogenization, a movement which has been promoted in postmodern thinking.8 All this has elicited heated debates. In the classical era, within the very heart of ašʿarism, al-Ġazālī (d. 505/1111) accepted the notion that even if the schools have contradictory rulings, they can nevertheless all be correct. At the same time, Faḫr al-Dīn al-Rāzī (d. 606/1209?) and Šihāb al-Dīn al-Qarāfī (d. 684/1285) rejected this possibility. The Ḥanbalī theologian Ibn Taymiyya (d. 728/1328) also opposed al-Ġazālī in his criticism of taqlīd on this point.

The relationship between taqlīd and iǧtihād is therefore complex. The purpose of this issue of MIDEO is to study the two approaches in greater depth, in the light of the Islamic heritage. The history of Islamic thought shows that distinctions have been made between the fundamental principles (uṣūl) and the branches of fiqh (furūʿ), that relationships with related concepts have been developed (iḫtilāf, ittibāʿ, iǧmāʿ, tarǧīḥ), that taqlīd has been evaluated in different terms (ḥarām, maḏmūm, mubāḥ), and that distinctions have been made in terms of degrees of iǧtihād. This issue of MIDEO will therefore explore these various, yet related concepts. We will highlight theological discourses arguing for their legitimacy, refutation, as well as those that explore their articulation (which can sometimes be paradoxical, as is the case for al-Ġazālī’s criticism of the philosophers).9 Beyond the rivalry between these two approaches, it will be necessary to see if there exists a continuum between them, and that although their perspectives are competing and partisan, they are in fact not incompatible.10

8 Shahab, Ahmed, What is Islam? The Importance of Being Islamic, Princeton University Press, 2016.