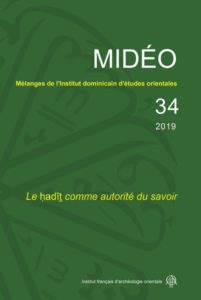 The canonization of Ḥadīṯ has not been without theological conflicts: between the Qurʾānic scholars, the traditionalists, and the rationalists, the question raised is always that of the authority of knowledge. How has the authority of Ḥadīṯ been built and how has the science of Ḥadīṯ been transmitted and gave birth, within the schools of Fiqh and the various currents of Islam (kalām, philosophy, etc.), not only to a plurality of interpretations but also to the elaboration of an epistemological framework? The theme of this issue of MIDEO seeks to understand the source of the authority of Ḥadīṯ understood as an intellectual sovereignty, to grasp the reality of its authority as « text » (matn), and to question the extent of the fields of knowledge in which Ḥadīṯ is authoritative.