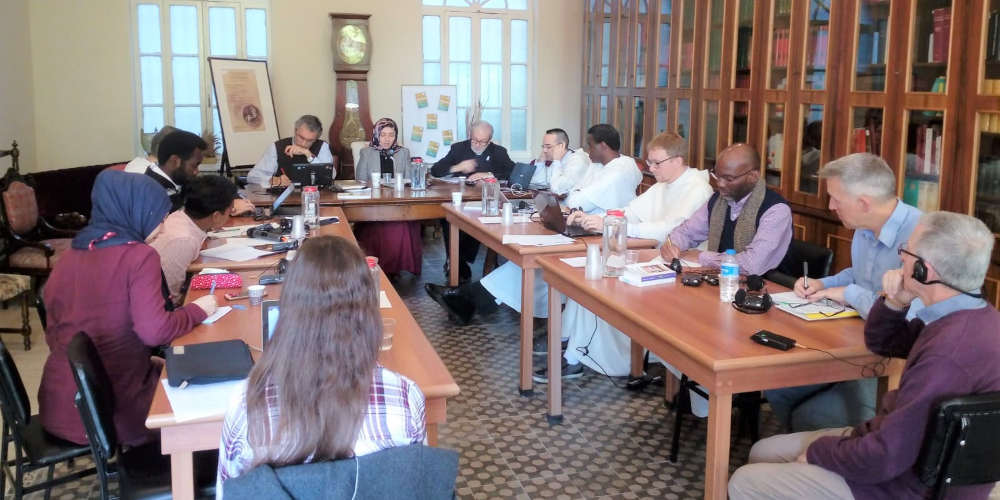 from May 1 to 5th, DoSt-İ, the Dominican Study Institute in Istanbul, directed by Claudio Monge, OP organized an international conference devoted to holiness in Islam and in Christianity (see photo). Dominicans have been present in Turkey since the 13th century, serving mainly the Eastern Catholic Christian communities. For several years, they have been working on the development of an intercultural and interreligious program, in dialogue with the Turkish society at an academic level. Our common vision will certainly give us the opportunity to work together in the coming years.

From May 1 to 5th, Claudio Monge, OP and Luca Refatti, OP organized a seminar in Istanbul devoted to holiness as a threshold between the divine and the human. Discussions between Christian and Muslim participants showed that holiness is a dynamic category that involves both separation and presence, and is not limited to the religious sphere. Emmanuel Pisani, OP and Sunil Tirkey, OP also participated in this seminar.

From May 11 to 31st, Mr. Guillaume de Vaulx organized an exhibition entitled “Paper Identities” in Beit Beirut. During this exhibition, he organized on May 20th a conference under the same title, during which he made a presentation entitled “Identity logic and the death of philosophy”.

On May 2nd and 3rd, Emilio Platti, OP gave a lecture entitled “From Graf to Griffith: The Classical Work of Arab Christians” during the conference “The Philosophical School of Baghdad in the 10th and 11th Centuries”, organized by Saint Joseph University and the American University of Beirut.

On May 10th, Emmanuel Pisani, OP gave a lecture entitled “What is dialogue for Maurice Borrmans?”, during a study day entitled “Maurice Borrmans, a figure of Islamic-Christian dialogue” organized by the Centre for Studies of Cultures and Religions at the Catholic University of Lyon.

From May 11 to 19th, Adrien Candiard, OP gave a series of lectures in northern Italy on his book Understanding Islam, or rather: Why we understand nothing (Flammarion, 2016) and on the play Pierre et Mohamed (Tallandier, 2018), on the occasion of the translation into Italian of the two books (EMI, 2019).

On May 13th, Mrs. Catherine Mayeur-Jaouen gave a lecture in Paris on her book Voyage en Haute-Égypte : Prêtres, coptes et catholiques (CNRS Éditions, 2019). Click here to listen to the lecture… (in French).

On May 18th, Emmanuel Pisani, OP gave a lecture entitled “Dialogue with Islam: A stubborn respect”, during the “Olivier Clément Conference” organized by the Saint-Serge Institute in Paris.

On May 4th, Jean Druel, OP was interviewed by Chiara Pelligrini for the journal Oasis on the reform of religious discourse in Egypt. Click here to read the interview in Italian…

On May 24th, Mr. Dominique Avon was interviewed on “Contemporary Sunni authorities and the challenge of the classical heritage”. This interview was carried out as part of the scientific interest group “Religions. Practices, texts, powers”. Click here to watch the interview in French…

From May 29 to 31st, Emmanuel Pisani, OP participated as a member of the jury for the certificates and licenses of the ecumenical theological institute al-Mowafaqa in Rabat.

From May 16 to 19th, René-Vincent du Grandlaunay, OP went to the Biblical School in Jerusalem to lead a mission to evaluate the library.

On May 21st, 22nd and 23rd, we received a team from the La Pira Library in Palermo in order to finalize our collaborative project. An initiative of the Fscire Foundation (Fondazione per le Scienze Religiose Giovanni XXIII of Bologna), the La Pira Library is dedicated to the intellectual history of Islam.

On May 23rd, we received Pastors Justin Meyers and Jeffrey Bos, from the interreligious dialogue Al Amana Centre in the Sultanate of Oman. They were accompanied by Pastor Naji Umran, who is serving in Cairo.

In May, we had the pleasure of receiving in the Scholars’ House Mr. José Antonio Paredes, professor of philosophy and independent researcher in Madrid, Ms. Gyöngyi Oroszi and Mr. András Szenczi, PhD students at the Avicenna Institute in Piliscsaba, Hungary, Ms. Jamela Ouahhou, Master’s student at the University of Aix-Marseille, Mrs. Rosanna Budelli, Mrs. Stefania De Nardis and Mr. François-Xavier de Saint-Pern from the La Pira Library in Italy.