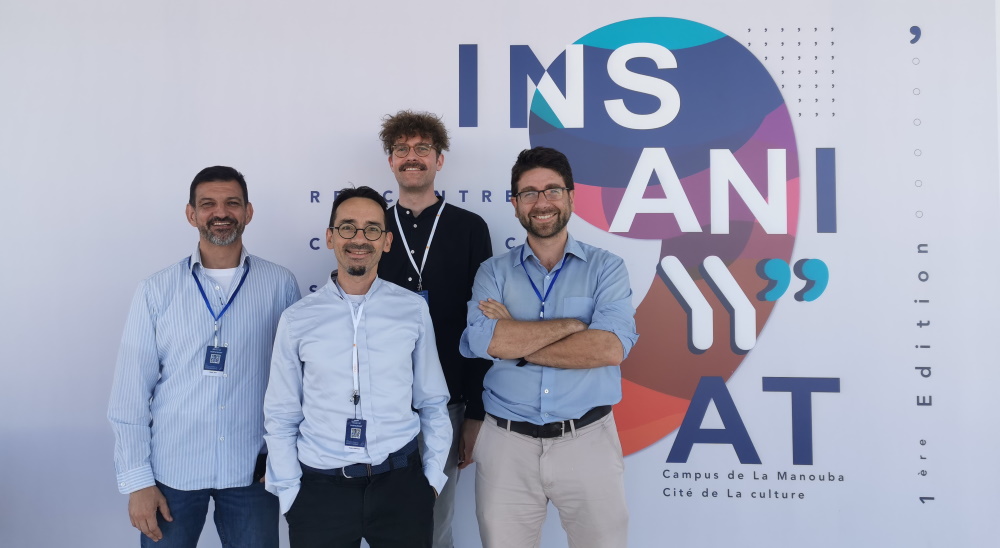 The Forum Insaniyyat, a social sciences forum in which four members of the IDEO participated, was held in Tunis from September 20ᵗʰ to 24ᵗʰ, 2022. It opened with a fundamental question: the crisis. But as Professor Jocelyne Dakhlia, historian of the Maghreb, remarkably introduced in her opening lecture, a crisis that lasts for decades is no longer a crisis, and time exposes us to a true questioning about our work and the difficulties we face in doing it. Is it possible today to develop a free thinking, to freely exercise our research, independently of political pressures and the dissolution of our words in the media flow? Faced with the difficulty of thinking about issues which are not our own, which we would first like to deconstruct, and of which we are subjected to the brief and incisive interpellations that are a cut-off point for thinking, Jocelyne Dakhlia has nevertheless taken a resolutely optimistic and committed look. She spoke of a “favorable moment”, a moment that imposes itself on the world, where the relations of power are recomposed, notwithstanding the numerous difficulties and the persistent inequalities. In this new space that is taking shape, she concluded by inviting researchers to be a force of suggestions.  Take action.

From September 5ᵗʰ to 7ᵗʰ, Ms. Anne-Sylvie Boisliveau participated in the annual conference of the International Qurʾānic Studies Association in Palermo, Italy.

On September 16ᵗʰ, Dennis Halft, OP gave two talks at the 34ᵗʰ Deutscher Orientalistentag (DOT) in Berlin, in two different workshops on the topic “The East-West conflict through the study of the Near East in the 1960s and 70s” and “Self-Narratives of conversion from Islam to Christianity Iran and India from late 19ᵗʰ‒early 20ᵗʰ centuries”.

On September 21ˢᵗ, during the Forum Insaniyyat which took place from September 20ᵗʰ to 24ᵗʰ in Tunis, Adrien Candiard, OP, Dennis Halft, OP and Emmanuel Pisani, OP led the workshop “Medieval polemics between Sunnis and Shiites: the construction of a sectarian opposition”. They gave the following talks:

From September 22ⁿᵈ to 24ᵗʰ, Mr. Dominique Avon participated in the conference “Islam in popular culture: reconfigurations and new perspectives”, in Vienna, during the conference, he gave a talk entitled “Histories of Islam and Muslims in the Franco-Belgian comics”.

During September, Jean Jacques Pérennès, OP gave a lecture entitled “Father Serge de Beaurecueil reader of Ansâri, in love with Afghanistan”, in Lille and in Paris as part of the centenary of friendly relationships between France and Afghanistan.

We inform you that the videos of the conference “Islam and Otherness”, organized by the academic platform PLURIEL and held in Beirut at the Saint-Joseph University from May 23ʳᵈ to 27ᵗʰ are now available on YouTube. Watch the two-minute briefing of the conference and all the lectures.

You can also watch on our Youtube channel the report made on the four brothers from the United States, Poland and Cameroon who benefited this summer from the scholarship of initiation to Arabic and Islamic studies.

On August 24ᵗʰ, Jean Druel, OP on behalf of the LRM-CS association which now manages the development and distribution of the Diamond cataloging application, signed a contract with the Saint Mark Foundation of the Coptic-Orthodox Patriarchate for cataloging Coptic manuscripts. This project, the first phase of which is planned to last three years, began on September 1ˢᵗ. The first records are available here…

On September 23ʳᵈ, Mrs. Manal Belhajali and Jean Druel, OP presented the Maryana project at the Forum Insaniyyat in Tunis. This project consists in creating in Diamond a virtual library of translations into Arabic of literary works from the Nahḍa era. The records will be available here…

On October 5ᵗʰ, Jean Druel, OP resumed his teaching of Biblical Greek, beginner and intermediate, at the Institute of Religious Sciences in Sakakini, Cairo.

Emmanuel Pisani, OP has resumed since September 19ᵗʰ his teachings at the ICP via the online Theologicum. In particular, he teaches the course The Foundations of Islam.

You can subscribe or unsubscribe to our newsletter. If you would like to receive our invitations for the seminar, please mark the corresponding box.