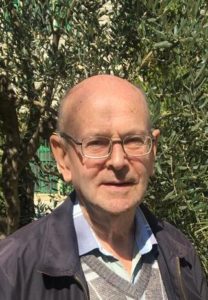 Michel Cuypers is Belgian, born in 1941, a friar, and a member of the Fraternity of the Little Brothers of Jesus (Father Charles de Foucauld). He currently lives in Ḥagāza, a small city near Luxor, Egypt.

He lived twelve years in Iran, where he obtained a PhD in Persian literature at the University of Tehran (1982) and then worked at the University Press of Iran. He was the co-founder of Luqmān, a journal of iranology. Michel Cuypers left Iran in 1986 and, after studying Arabic, in 1991 he became a researcher at IDEO (Cairo). Since then, he focuses on the rhetoric analysis of the Qurʾān.

You can find on this website an example of rhetorical analysis applied to the Fātiḥa, an article entitled “A new vision of the composition of the Qurʾān” (in Arabic), including a brief history of the method, with the example of Sūrat al-Qāriʿa and an extract from Sūrat al-Māʾida, as well as an article comparing the rhetoric of the Qurʾān with that of a Pharaonic papyrus (in English).

In 2007, he published Le Festin. Une lecture de la sourate al-Māʾida (Paris: Lethielleux). In 2009, this book was granted the “World Prize for the Book of the Year”, awarded by the Ministry of Culture and Islamic Guidance of the Republic of Iran as “one of the best new works in the field of Islamic studies”.

In 2014, he published Une apocalypse coranique. Une lecture des trente-trois dernières sourates du Coran (Pendé, France: Gabalda), in which he summarizes and develops his previous articles on the latest chapters of the Qurʾān. English translation: A Qurʾānic Apocalypse. A Reading of the Thirty-Three Last Surahs of the Qurʾān, (IQSA, Lockwood Press, 2018). Arabic translation expected in 2022.