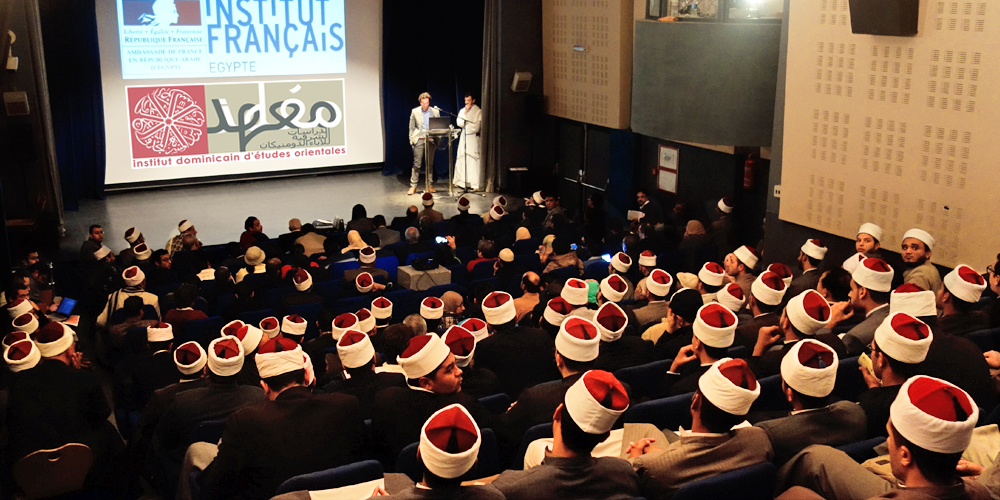 The IDEO conference on Ḥadīṯ, organized in partnership with the French Institute of Egypt (see photo), was an extraordinary occasion for young specialists from several different countries to meet together. Methodological issues largely dominated the conversation: how to study Ḥadīṯ today, is this great set of literature attributed to the Prophet? The quality of the discussions and the diversity of participants encourage us to continue our efforts in building bridges between researchers in Islamic studies in the West and in the East.

On January 11, 12 and 13, the IDEO, in partnership with the French Institute, organized an international conference entitled “The emergence of Ḥadīṯ as the authority of knowledge”. For three days, there were lectures given in Arabic and English, as well as workshops, led by Dr. Walid Saleh and Dr. Aisha Geissinger. Read the report…

From January 6-13th, we welcomed M. Jari Kaukua, Professor of Islamic philosophy at the University of Jyväskylä in Finland. On January 8th, he led a seminar on al-Suhrawardī (d. 587/1191). Instead of totally rejecting the Avicennian notion of substance, al-Suhrawardi integrates it into a wider theory of knowledge.

On January 2nd, Dennis Halft, OP gave a lecture entitled “What Did Jewish and Christian Converts to Islam Contribute to Muslim Polemics against Judaism and Christianity?”, at the Center for the Study of Conversion and Inter-Religious Encounters at Ben-Gurion University of the Negev in Beer Sheba, Israel.

On January 11th, Dennis Halft, OP gave a lecture entitled “Vatican Censorship and the Printing of the Gospels in Arabic”, at the international conference “Typographia Linguarum Externarum. The Medici Press: Knowledge and Cultural Transfer around 1600” organized by Max-Planck Kunsthistorisches Institute (Florence, Italy).

On January 25th, Emmanuel Pisani, OP led a discussion on the origins of Islam with Jacqueline Chabbi, Ruth Grosrichard, and Esma Hind Tengour, at the Arab World Institute in Paris.

From January 9-15th, we received the visit of Mr. Bruno Racine, President of the Association of  “The Friends of IDEO”, Bertrand Wallon, secretary general and Denys Bourguignat, responsible for the publication of the The Friends of IDEO Newsletter.

On January 10th, we received the visit of Mr. ʿAbd al-Raḥmān al-Ahdal and Muḥammad Ṣāliḥ from The Tafsīr Center  in Riyadh, Saudi Arabia as part of our cooperative agreement.

From January 18-20th, we received the visit of P. Thom Sicking and P. Gabriel Hachem, responsible for the publication of  Proche-Orient chrétien magazine, who came to study the possibility of collaborations between IDEO and the magazine.

On January 19th, we received the visit of Charles Saint-Prot, director of the Observatory of Geopolitical studies (Paris) and Thierry Rambaud, Professor of Public Law at the University Paris Descartes-Sorbonne.

On January 29th, we welcomed for lunch Mrs. Jessica Olausson and Mr. Mark Seah, Minister Counsellors at the Embassies of Sweden and Singapore, respectively.

In January, we had the pleasure of receiving at the Scholars’ House Mrs. Catherine Mayeur-Jaouen, IDEO member and Professor of History of Modern and Contemporary Islam at the University of Paris-Sorbonne, Mr. Lutz Rogler, Professor at the University of Berlin, and Mr. Ronan Humeau, student of Arabic and International Relations at the National Institute of Language and Civilization (INALCO – France).